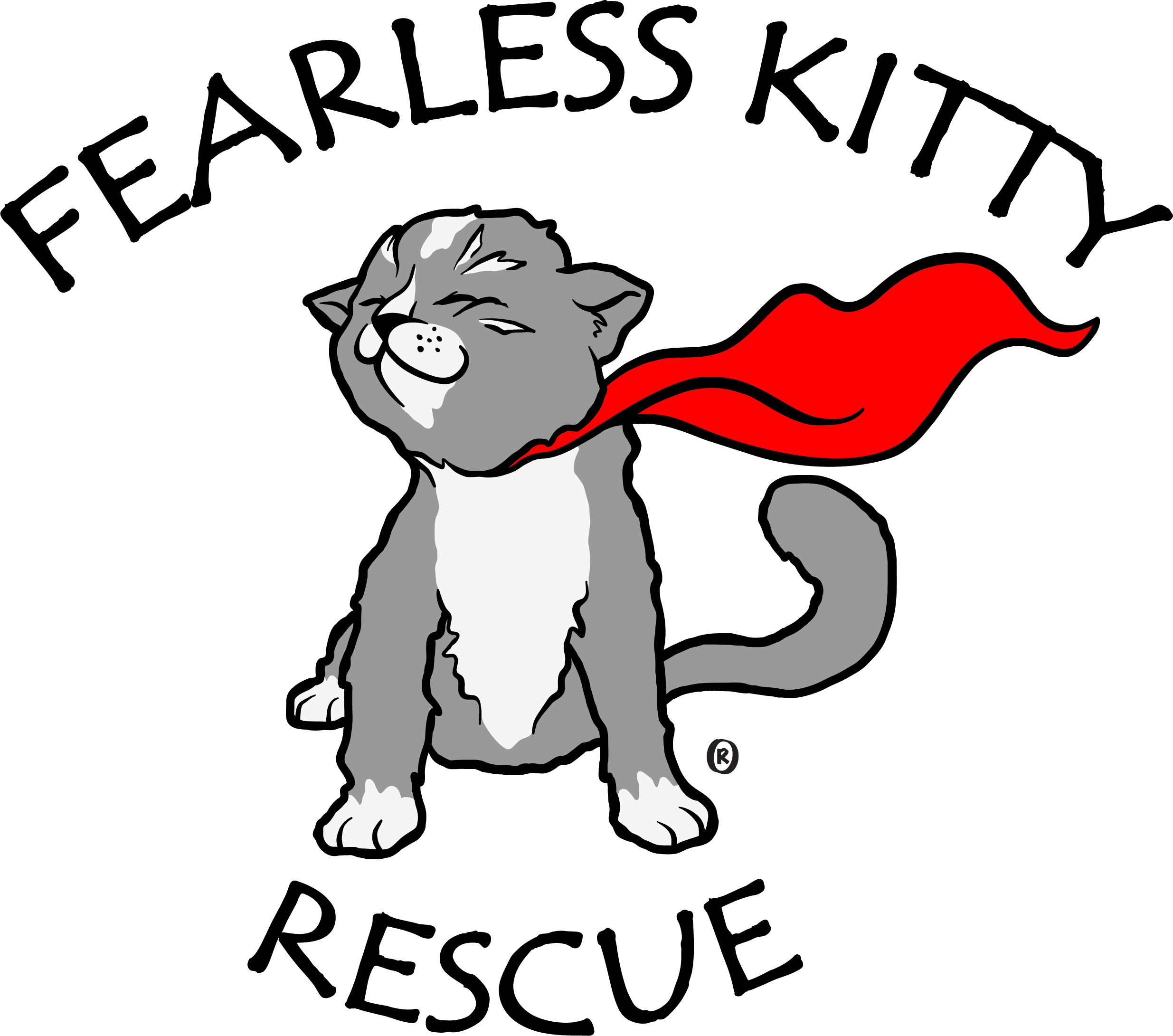 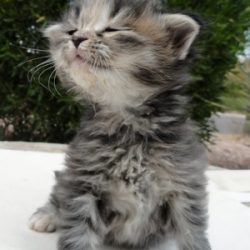 The inspiration behind our logo is one of our very own fearless kitties, Karma. She was outside, with her chin held high, standing FEARLESSLY. It was the perfect display of a Fearless Kitty. Since the photo was snapped, she has found a loving home but her indomitable spirit continues to inspire the mission behind Fearless Kitty Rescue.

Fearless Kitty Rescue is a recognized 501(c)(3) non-profit, no-kill cat rescue, serving our immediate community of Fountain Hills, Arizona and surrounding areas. We are dedicated to rescuing cats left homeless for whatever reason – cats in municipal shelters where they are at high risk of euthanasia due to animal overpopulation, abandoned and homeless strays, cats surrendered by their owners because of difficult circumstances, and those in danger of abuse or neglect.

We place cats in loving, responsible, committed, permanent homes, following a comprehensive adoption process which includes taking considerable care in finding good matches and educating prospective adopters about the responsibilities and costs of bringing a cat into their homes and lives.

We also serve as a information resource to our community and all pet owners by providing education and information on responsible pet ownership, including the importance of spaying/neutering, positive behavior training, and good nutrition.

All cats in our care are spayed or neutered, vaccinated, tested for FIV/FeLV, microchipped, and treated with all appropriate veterinary care from our dedicated private practice veterinarian. Upon arrival to our rescue center, Kittyville, our kitties are cared for by our amazing team of volunteers while they wait for their forever homes.  We rescue cats in distress without regard to age, breed, or ease of placement.

We are determined to keep administrative expenses extremely low so that virtually every dollar taken in goes directly to the care of our kitties. Our group remains interested in and committed to the welfare of cats beyond the adoption process. For any reason, our adopted cats are always welcomed back to our rescue if their owners are no longer able to care for them.

We strive to work with area shelters and other rescue and humane organizations to develop a network of supporters and volunteers in order to create a better world for homeless pets.

As a 501(c)(3), Fearless Kitty Rescue relies on donations, grants, and the generous time of its volunteers to succeed. We are part of a bigger movement across our nation to end the killing of homeless animals in shelters by the year 2025. With your support, we know we can reach this goal!

Kim Kamins and Paula Stefan decided to create Fearless Kitty Rescue in 2012 after they met while saving kitties. They pooled their talents to create a highly regarded organization. As scores of dedicated volunteers will attest, their energy is infectious! And thanks to their efforts, thousands of kitty lives have been saved.

“Fountain Hills is the only town in the county that does not send cats to the Humane Society for euthanasia,” Kamins said. “We are proud of the way the program has worked. We are completely dedicated to the no-kill philosophy.” 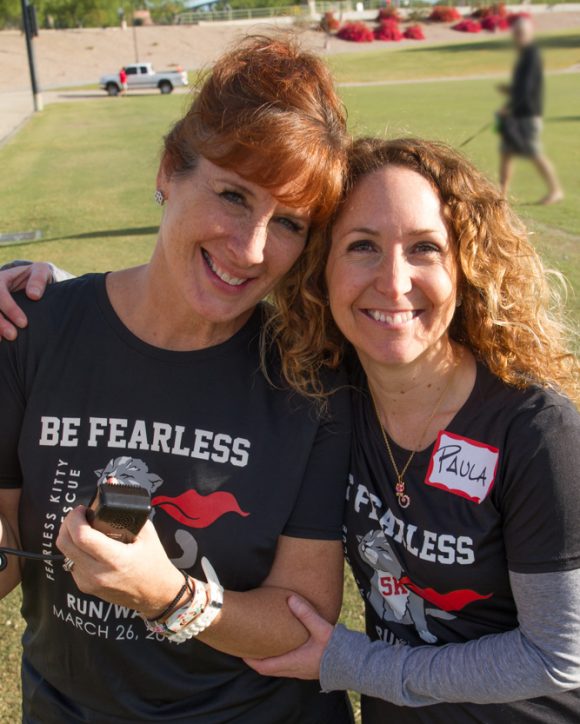 Kim holds a Master’s Degree in Clinical Psychology. She taught at the college level for one year, after spending 14 years as a Police Officer for the City of Chicago, and then Buckeye, Arizona, Police Departments. In Chicago she worked as an Assistant Department Advocate in the Internal Affairs Division. Later, in Buckeye, she gained experience working with the public as a Community Resource Officer and Code Enforcement Officer. That work not only helped her develop special skills in dealing with the public, but also exposed her to the cruelty many animals face. She spent more than 2 years volunteering in key positions with another cat rescue group before co-founding Fearless Kitty Rescue. That experience, combined with her natural compassion and her ability to deal constructively with harsh realities, make her a powerful animal advocate in the community.

Paula brings a wealth of business management and operational experience to Fearless Kitty Rescue.  She has spent the last 20 years in the corporate arena in a variety of roles such as Office Manager for an accounting firm, and Compliance Administrator and Project Controller for two large general contractors, managing subcontractor insurance compliance, and client and subcontractor billing for $8MM to $20MM projects. She spent 2 years as a volunteer for another cat rescue group before co-founding Fearless Kitty Rescue, spending a majority of that time in a decision-making role. Her expertise in strategy and her passion for rescue fuel the leadership team.

Background… or Our “Tail”

As the saying goes, “It takes a village.” This is certainly the case when it comes to saving the lives of cats and kittens from the elements, unfortunate situations, and high-kill and other shelters in Arizona. Fearless Kitty Rescue was founded on the belief that all cats and kittens deserve a chance to be FEARLESS.

Prior to becoming a recognized 501(c)(3) non-profit organization, Fearless Kitty Rescue was a dream. Its founders, Paula Stefan and Kim Kamins, traveled different paths, but their volunteer work brought them together in September 2011, when they met while volunteering for another cat rescue group. Their passion and combined talents soon had them ensuring the success of that group, helping its director find great homes for cats.  After a year, they found themselves at a crossroads: the director of the group wanted to return to doing TNR (trap/neuter/return), while Paula and Kim found that they had discovered their true shared passion and wanted to serve the community through cat rescue and adoption. Their dream soon became a reality.

Knowing it would be a daunting task to build an organization from the ground up, these dedicated women combined their skills and accepted the tough challenges that lay ahead. With determination and caring, they resolved to be fearless. As a result, Fearless Kitty Rescue was officially born in August 2012, became a recognized non-profit organization in September 2012, and opened their free-roaming adoption center that same month.

Today, that hub of activity is affectionately known as Kittyville. Here, cats and kittens begin the transition to their new lives through socialization while living in a home-like environment, rather than in cages. For owner-surrendered cats whose pets would otherwise go to high-kill shelters, this environment is a soothing transition.  For strays and abandoned kitties that are often found wandering the desert in excruciating heat, Kittyville is an oasis.