Chaparral is an 8-year-old black & white bicolor. A Phoenix homeowner was providing food and water for Chaparral for about six months. She said he stopped by most mornings, ate, and then left. He would allow her to gently pet him so she was not sure if he was actually someone’s pet. The homeowner put up signs and posted online, but no one ever responded. She thought he looked like he had lost some weight so she humanely captured him and paid for a vet visit for a checkup, and to see if he had a microchip. A microchip was not found and the vet was fairly confident he was a stray. At that time, he was tested and given a rabies vaccine. His FIV test came back positive, and the vet said he should not be released back out to the neighborhood. Other than the positive FIV, the vet said he was healthy and aged him at about 8 years. The homeowner made him an emergency weekend house guest in her bathroom where he would be safe and comfortable, but due to her home situation, she could not keep him permanently. She said he is truly a very sweet, gentle cat that likes to be petted, and would make someone a wonderful pet. Chaparral became Fearless on August 16th. He has been neutered, vaccinated, and just had some dental work done. Chaparral is ready to find a home to call his own. 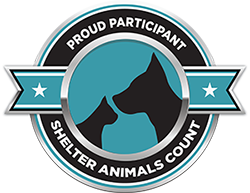